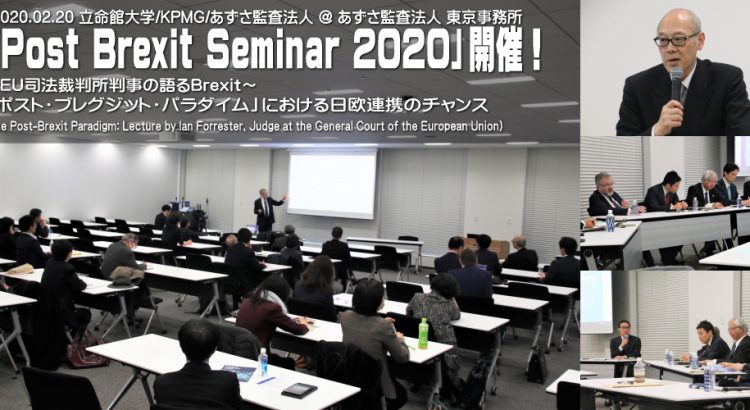 The following manuscripts were published in the Ritsumeikan Law Review from 2016 to 2020:

“Europe and Asia as Legal Areas for Peace, Fundamental Rights, Democracy and the Rule of Law”

Based on the history and development of the European unification process, the conference asks the question to what extent Asia can look to Europe as a model for an Asian legal sphere and what lessons can be learned.

From an economic point of view, East Asia is a highly developed region; despite the huge differences between the political systems, the region has grown together – not only economically, but in recent times also the demand for (and examples of) cooperative legal frameworks.

However, the legal systems of the respective countries have to be further developed and improved with mutual respect to create the necessary conditions for peaceful coexistence. It is precisely in this respect that we can learn from the European experience.

It is important to create legal institutions in the East-Asian region following the examples of the European Union or the Council of Europe to legally implement the principles of the rule of law, democracy, and guarantee of human rights. This would also contribute to the improvement of the quality of life in the entire region.

The Council of Europe and the European Union succeeded in building legal and political institutions after WWII, as well as establish effective judiciary systems. The Human Rights have emerged as the highest good for the co-existence in Europe. Without the protection of the human rights, Europe couldn’t have developed a community in such a peaceful and harmonious way.

This is why we consciously decided to focus on human rights for the three-day symposium in 2017 on the subject “Protection of Fundamental Rights in legal practice and dogmatics – Aspects of European and Asian constitutional, civil and criminal law” with distinguished lecturers and legal experts from the EU and Asia.

The symposium opened with a keynote speech about the “European Fundamental Rights’ Protection System” by Jean-Paul Costa, former judge and president of the European Court of Human Rights. This was followed by lectures and discussions about the situation and challenges in Japan, China, Korea and Taiwan. We also invited guests from Southeast Asia for the discussions to broaden the perspective.

Europe and Asia as legal areas for peace, fundamental rights, democracy and the rule of law

For the symposium in 2019 we have decided to move the discussion further and focus on the possibility of establishing an Asian legal sphere, considering the example of Europe. It will be one important aspect of this symposium, not to stop at one-sided descriptions of facts and situations, but to discuss, what options we have in Asia to initiate a similar development like in Europe: What parts of the European experience would be exactly applicable to Asia, and what would be the required conditions for this to happen? And are there elements in Asia’s development, which might be of interest to Europe (to solve)?

The movement for European unity has always seen itself as value-based. At present, however, these common values seem to be under threat and are no longer shared by those who see themselves as belonging to Europe.

Europe came together in various ways: it began with an initial economic and political focus within the framework of the European Union (EU) while the focus within the framework of the Council of Europe lay from the outset exclusively on the common values. Both forms of unions can only be understood by taking into account the historical background, the close community among the European states bound by a common destiny and the almost complete mutual destruction during the Second World War.

On the one hand, a narrow legal framework has emerged for 28 states, which creates a “supranational” community with the EU, which is in comparison to an international organization as well as to a state an “aliud”, which is permanently called upon to explain, develop and preserve its own specific characteristics. On the other hand, there exists a union of a further circle of 47 European states, which functions as a classical international organization.

The form of integration has changed fundamentally over the decades, especially after 1989. The states belonging to the socialist block at the time of the “Cold War” with a decidedly different political heritage were admitted to both organizations, but to a different extent: in the Council of Europe all states except Belarus, in the EU only the Central and South-Eastern European states. Moreover, the EU now no longer defines itself as a mere economic community but also as a community of values, so that the contents of the two unions are increasingly overlapping and thus partly strengthening, but also partly competing with each other.

The current challenges have to be seen against this historical background. In economic and legal terms, the withdrawal of one of the “core states”, the United Kingdom, is particularly difficult to manage. However, the questioning of a consensus on values considered fundamental can be seen as problematic for a community of values. This applies not only to the controversial issue of migration, but also to the understanding of the rule of law and democracy, which is being called into question by recent reforms, particularly in Poland and Hungary.

These current challenges and the history of the movement for European unity are important lessons to study and debate. Asia is not Europe and current-day Asia differs from the circumstances that lead to the unification of Europe: Besides the issues of huge economic gaps between neighboring countries and a wide variety of political forms of government, Asia also does not share the unifying narrative of post-WWII Europe, nor can it be described as a community of shared values.

These vast differences in history, economies, culture, traditions and values make it a particularly difficult environment to set up binding legal and political institutions comparable to the European Union or the Council of Europe. And yet, there have been encouraging developments besides the mere economical relationships in recent years.

Human rights may sound like an area where it’s difficult to find a consensus among the Asian nations. However, if one looks at the differences between the 1950s (or probably even the 1990s) and present Asia, an increasing number of developments in constitutional and international practices – especially the development of judicial review and interaction between different courts at the domestic, regional, and international levels –can be interpreted as an entry point to an Asian Human Rights court.

Recently, the establishment of the ASEAN Intergovernmental Commission on Human Rights (AICHR) suggests that there is the possibility of creating a transnational system to address human rights in Asia.

At the 3rd Congress of the World Conference on Constitutional Justice in Seoul in September 2014, the President of the Constitutional Court of the Republic of Korea,  Park Han-Chul, proposed the establishment of a Court of Human Rights in Asia.

Economically and politically, there are several multilateral organizations in Asia that were founded for different purposes (ASEAN, SAARC, ECO) and have lead to closer integration among Asian nations.

All these developments indicate that there may indeed be a way to create a common legal Asian sphere. That is why we chose the ambitious topic of “Europe and Asia as legal areas for peace, fundamental rights, democracy and the rule of law”.

Structure of the Symposium

We have invited scholars and legal experts from Europe and East- and Southeast Asia (Taiwan, Korea, China, Vietnam, Thailand) to ensure that the lectures and ensuing discussions will provide the platform for lively exchanges and the opportunity to identify the relevant aspects for all countries concerned.

The lectures are organized over two days into three sessions focusing on different issues. Each session consists of either a keynote speech or a series of special lectures that are followed by moderator-facilitated breakout discussions, the results are summarized and formulated in topic-suggestions and these are then discussed in the plenary to ensure that all participants can engage and contribute to the success of the symposium.

The Institute for Justice Systems in Comparative Law (IJSCL) at the Ritsumeikan University in Kyoto was established by Prof. Dr. Masahisa Deguchi in 2020